Mechanical methods for particle size analysis include field fractionation techniques such as field-flow fractionation or FFF, in which particles are separated in fluid flow due to their differential mobilities, and disk centrifugation, where particles are rotated at high speeds in a disk and separate due to their differential motion in a centrifugal force field. These are each described in more detail below.

Field fractionation techniques separate particles suspended in a fluid sample using what is called a "field," where under the action of the field, different particles move at different rates. The field used for the separation depends on the particular instrument; it can be a gravitational field, a centrifugal field, a thermal gradient, a magnetic force, and so on.

Field flow fractionation (FFF) provides the best known method for field fractionation. Fluid containing the particles to be analyzed is flowed through a long channel whose sides are formed by semi-permeable membranes. A gentle perpendicular fluid flow is passed through these membranes, causing a slow drift in the particles moving along the channel, where larger particles move slightly faster in this cross-flow than smaller particles, due to their larger hydrodynamic radius and thus larger drag coefficient. At the output of the channel, there is as a result a gradient of particle sizes across the width of the channel, and this gradient is detected, typically using an optical imaging method, which measures the relative concentration of different diameters across the channel width. This is not a single particle-by-particle method, as it measures a bulk response. Quantitative concentration measurements are difficult, but proportional particle number versus hydrodynamic radius information can be extracted.

The method requires little sample preparation and the instrument is a bench-top instrument. Cross-contamination of samples can occur as the analysis volume is not disposable. It is not a single particle method, so suffers from the usual challenges, yielding more proportional than absolute particle size and concentration information. It works for a wide range of particle sizes, which can be separated with diameter differences as small as 10%. However it can be confounded by the parabolic Poiseuille flow pattern in the main channel, where particles near the boundary flow more slowly and can accumulate on the downstream side of the separating flow, while on the opposite, upstream, side the particles cross into the higher flow rate near the center so separate by a different amount from particles that start in the channel center.

Disk centrifugation is another field fractionation technique. Field fractionation separates particles suspended in a fluid sample using what is called a "field," where under the action of the field, different particles move at different rates. The field used for the separation depends on the particular instrument; it can be a gravitational field, a centrifugal field, a thermal gradient, a magnetic force, and so on.

In disk centrifugation, the sample is placed in the center of a rotating fluid-filled disk, which is then rotated about its axis at a high rotational velocity (typically 10,000-25,000 rpm), creating an effective gravitational field along the plane of the disk, many hundreds or thousands of times larger than the Earth's gravitational field. If a particle in the sample has a higher density than the fluid in the disk, it will feel a net force in the direction of this field, due to the balance of the centrifugal force and the buoyant force of the fluid. It will then move at a velocity determined by the balance of the net force and the fluid frictional force, where the latter scales with the fluid viscosity and the particle's hydrodynamic radius. A collection of particles with the same density but different diameters will thus separate in time because their terminal velocities (or mobilities) scale inversely with their diameters. When the particles diffuse to a certain diameter in the disk, they pass through a laser beam and obscure the light transmission to a detector on the other side of the disk. The degree of obscuration is proportional to the optical density of the particles (a combination of particle scattering strength and the number density of the particles), and the transmitted light intensity as a function of time allows the particle size distribution to be inferred.

A wide range of particle sizes can be analyzed using this technique, from maybe 10 nm to 10 μm. It is not a single particle technique, and only proportional concentration measurements can be made, due to the convolution of particle number density and optical density when monitoring the light transmission. Samples containing a range of different particle types are therefore difficult to analyzer. Quite high particle size resolution, maybe 5-10%, is possible. Sample preparation is minimal, but cross-contamination is possible because the disks are not disposable. 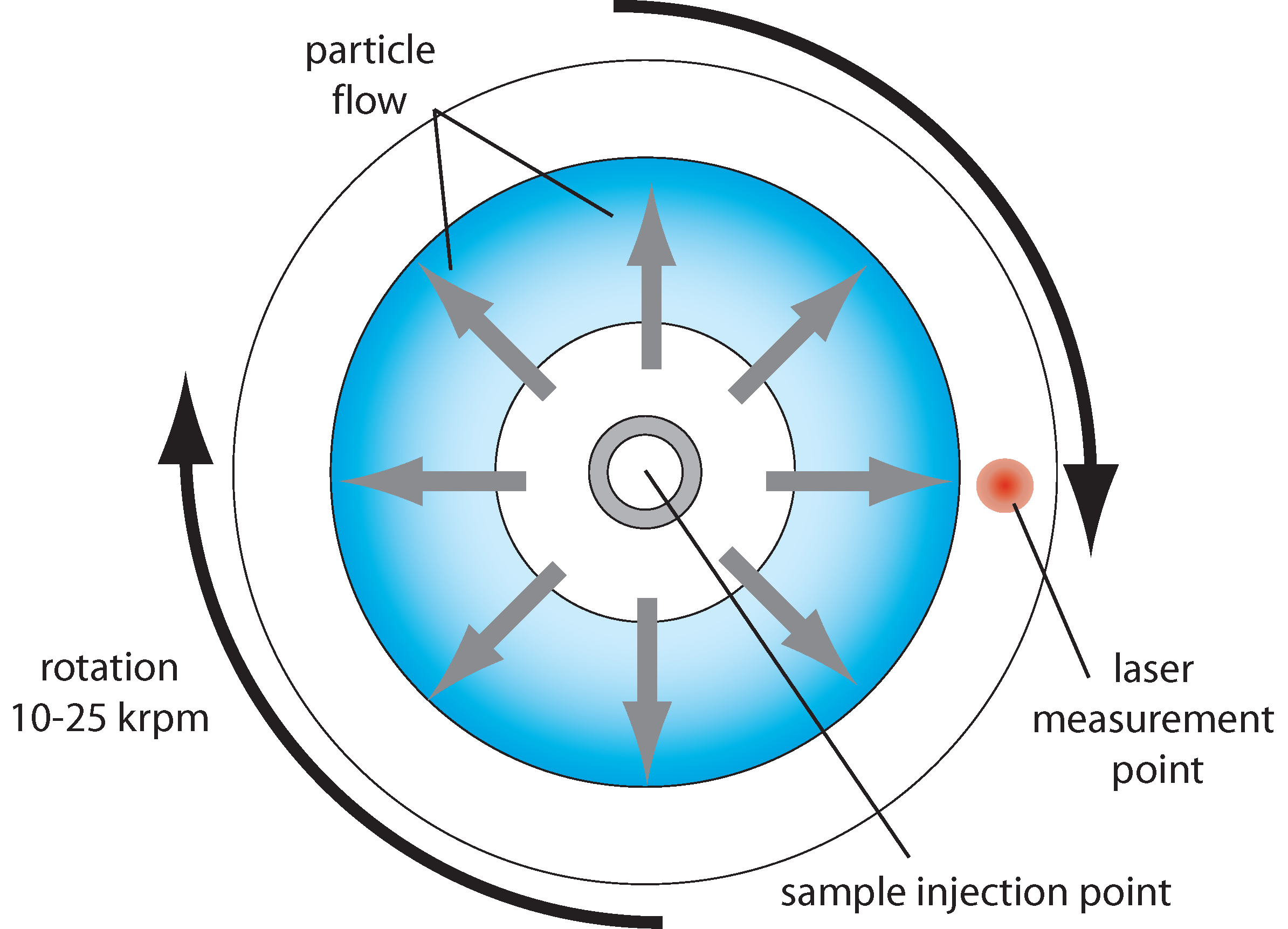